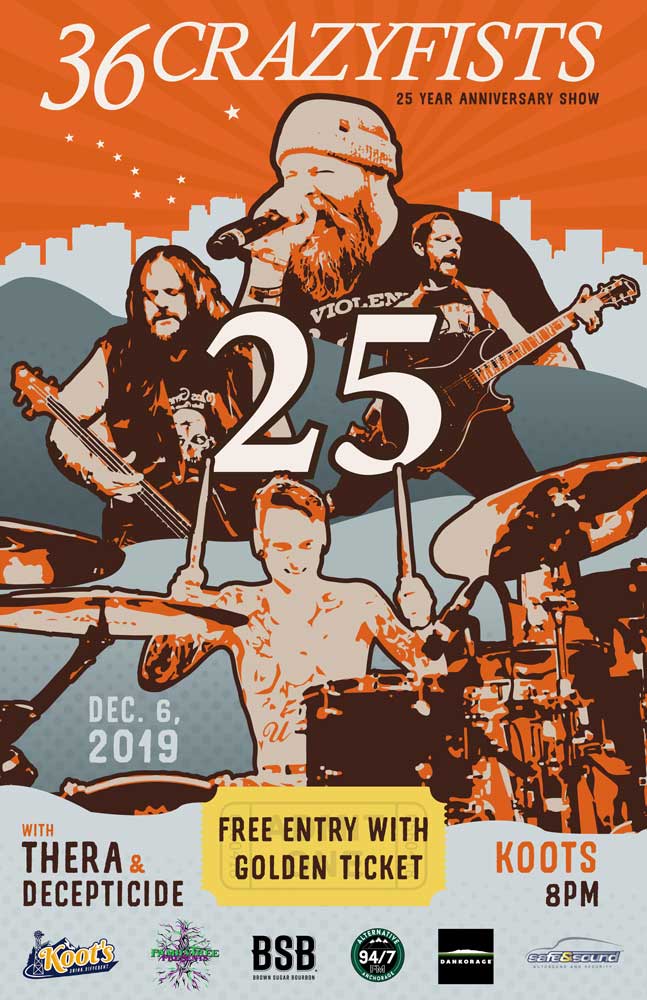 Family Tree and Koot's are proud to present the 25th Anniversary celebration show for 36 CRAZYFISTS.  They will be performing live at Koot's on Friday, December 6th along with Thera and Decepticide at 8 PM.

Thanks to our generous sponsors, this is a FREE show but you MUST have a Golden Ticket for entry.  Golden Tickets will be given away via various contests and drawings at sponsor locations throughout Anchorage that will be announced soon so stay tuned.

They return home for their 25th Anniversary as a band playing at their favorite hometown venue, Koot's.

We, 36 Crazyfists, along with the help from some very generous sponsors, have decided to throw our 25th Anniversary show at Koot's for FREE.  In order to attend you need a Golden Ticket.  We have placed these Golden Tickets throughout Anchorage and online for you to find all starting on MONDAY, November 18th!

Dankorage and Safe & Sound Alaska are our two main sponsors.  Both will have tickets to give away in house so stop by their locations in Anchorage starting Monday, November 18th for your best chance to win.

Brock and Bob will be giving tickets away on the KWHL Morning Show courtesy of BSB-Brown Sugar Bourbon so listen in daily to win.

36 Crazyfists, Family Tree Presents, Koot's, Thera, and DECEPTICIDE will be giving away tickets online so check their Facebook Pages and Instagram accounts daily for ways to win.

Last but not least, we will have some Golden Tickets floating around "secret" spots in Anchorage.  Mystery friends will be carrying around tickets.  We'll announce these ticket carriers and where they are located randomly throughout Anchorage in the next three weeks leading up to the show.  If you see the post, show up to the location and grab your Golden Ticket.

Good Luck to all and happy hunting!