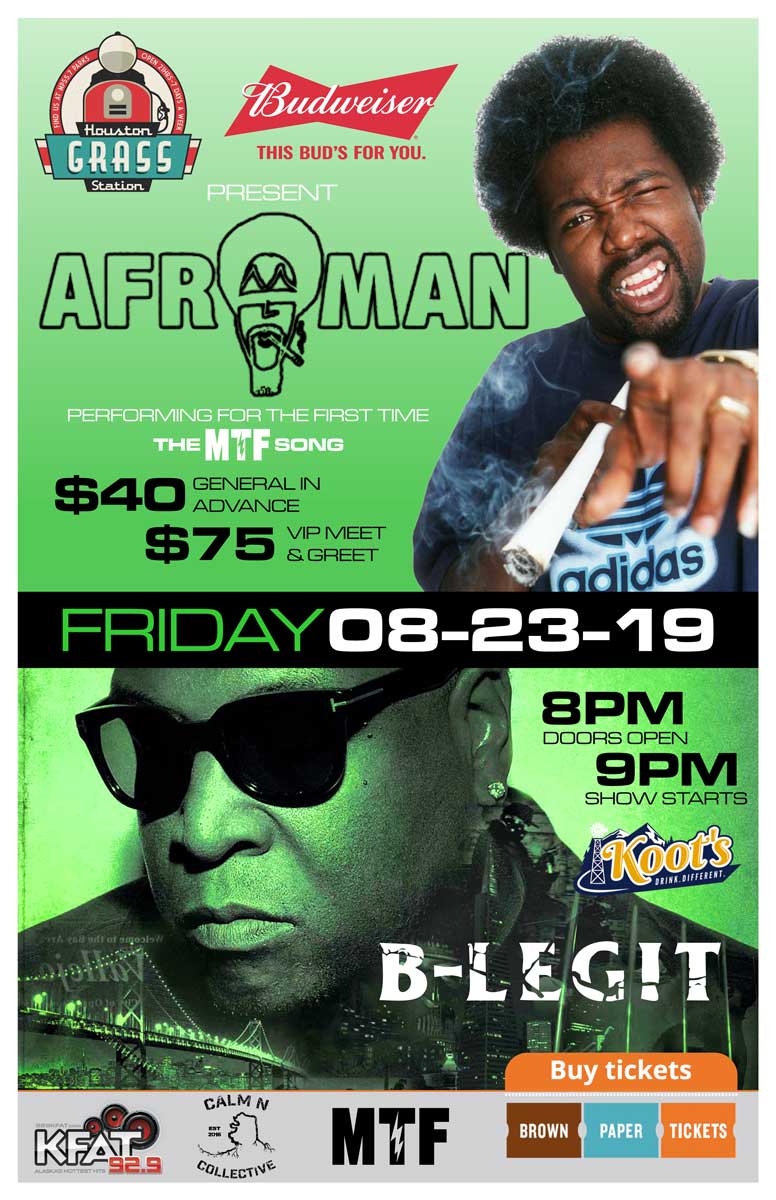 "The first tape I made was about my eighth-grade teacher," recalls the 30-year-old rapper, whose real name is Joseph Foreman. "She got me kicked out of school for sagging my pants, which was a big deal back then. So I wrote this song about her and it sold about 400 copies: it was selling to teachers, students, just about everybody. And I realized that, even though I wasn't at school, my song was at school, so in a way I was still there. All these people would come by my house just to give me comments about how cool they thought the song was."

That episode was precisely the proverbial 'kick in the pants' Afroman needed to satisfy his burgeoning musical aspirations. Using a low-cost microphone, tape deck and mixer -- purchased by his parents to "keep him out of trouble" -- the novice rapper went from ragging on his teacher to crafting spirited tapes filled with his patented mixture of perceptive humor and straight-from-the-street sentiments. "I'd hustle to all the swap meets in LA until security ran me out," he remembers adding that he initially lived in the infamous South Central section of Los Angeles before moving, as a teenager, to Palmdale, California. "I also went to all the low-rider shows and Venice Beach. Basically, any function where I thought I could flip over a dollar and expose people to my music." That hustling ultimately paid off when "Because I Got High" from THE GOOD TIMES, his debut full-length CD, became the most popular summer song of 2001. A hilarious ode to the pitfalls of smoking marijuana, the track was a Top Ten tune in over a dozen countries, with the album certified gold in the United States.

"In two minutes, eleven seconds, I had written a hit, but before that it had taken me nearly seven months to recognize I had a marijuana problem," says the now-reformed rapper. "It was only then that I realized everyone talks about smoking weed, but no one ever really talks about the effects of marijuana. We know about the effects of drinking beer, we know about the effects of looking at a naked lady, but nobody knew about the effects of smoking weed. Actually, the problem was more that the people who did know weren't songwriters; they were just dudes walking down the beach or whatever. So I decided to write that song." Now, Afroman is following up the worldwide success of that recording with the aptly titled AFROHOLIC ... THE EVEN BETTER TIMES, a comprehensive, two-disc collection -- released on his home-grown Hungry Hustler Records label -- showcasing forthright lyrics, skilled guitar work and infectious hooks. Whether raising the roof with "Let's Get High Tonight," reliving painful "Ghetto Memories" or simply "Hittin' Switches," every hip-hop-infused cut is hard-rocking and undeniably heartfelt.

At the same time, while most of the tracks admittedly focus upon having a good time, listeners who know Afroman solely through "Because I Got High" are in for a surprise. "I caught a lot of flak for having so many drug references in my music, so on this album I wanted to give cats a few songs that are really good but don't say anything about drugs," reveals the singer. "For example, on 'Cali Swangin',' I'm talking about low-riding, which I really love to do. That's one of my hobbies -- it's kind of like skateboarding to me. I've also got another tune called 'Just My Paranoia' that's simply my interpolation of the song 'Just My Imagination.'"

Regardless of the subject, for Afroman the most important thing, both in creating the music and sharing it with fans, is that he and his audience are having fun. "Music was really made for a good time," he notes, adding that key influences include classic hip-hop heroes like Too Short, DJ Quik and 2 Live Crew. "Nowadays, most Los Angeles rappers want to kill you, which is natural, because it's LA, and a lot of those dudes are gang members who've come off the street. Well, I don't really care about this guy trying to kill me in the verse; I just like the funk he's rapping to. So on AFROHOLIC ... THE EVEN BETTER TIMES, I decided to fillet all the bullshit. I tried to get rid of all the hostility and animosity out there that usually goes with the funk, and just rap with clever, uplifting lyrics."

Ever since the eighth-grade expulsion that kick-started his career, Afroman has striven to fuse the finest early rap elements with modern-day attitudes, creating high-spirited yet unquestionably up-to-the-minute melodies. From his perspective, if the tunes sound a tad familiar, that's fine, so long as his fans are smiling, dancing and, most important of all, having a grand time.

"You know how all Mercedes Benzes look related to each other?" he asks. "Well, I don't want my music to be the equivalent of an Impala or a damned Cadillac, where one day it looks like a coupe, the next day it looks like a truck, and tomorrow it may look like a freakin' helicopter or something. I want to give cats the best of the future and, of course, maintain the past. Kind of like Mercedes Benz does with the look of their cars, where you can always see the resemblance. I want people to think of AFROHOLIC ... THE EVEN BETTER TIMES as a great '80s West Coast disc where the guy's not killing everybody. I want them to spend their $17 or whatever and, when all is said and done, just feel happy."


Thank you! Your submission has been received!
Oops! Something went wrong while submitting the form.