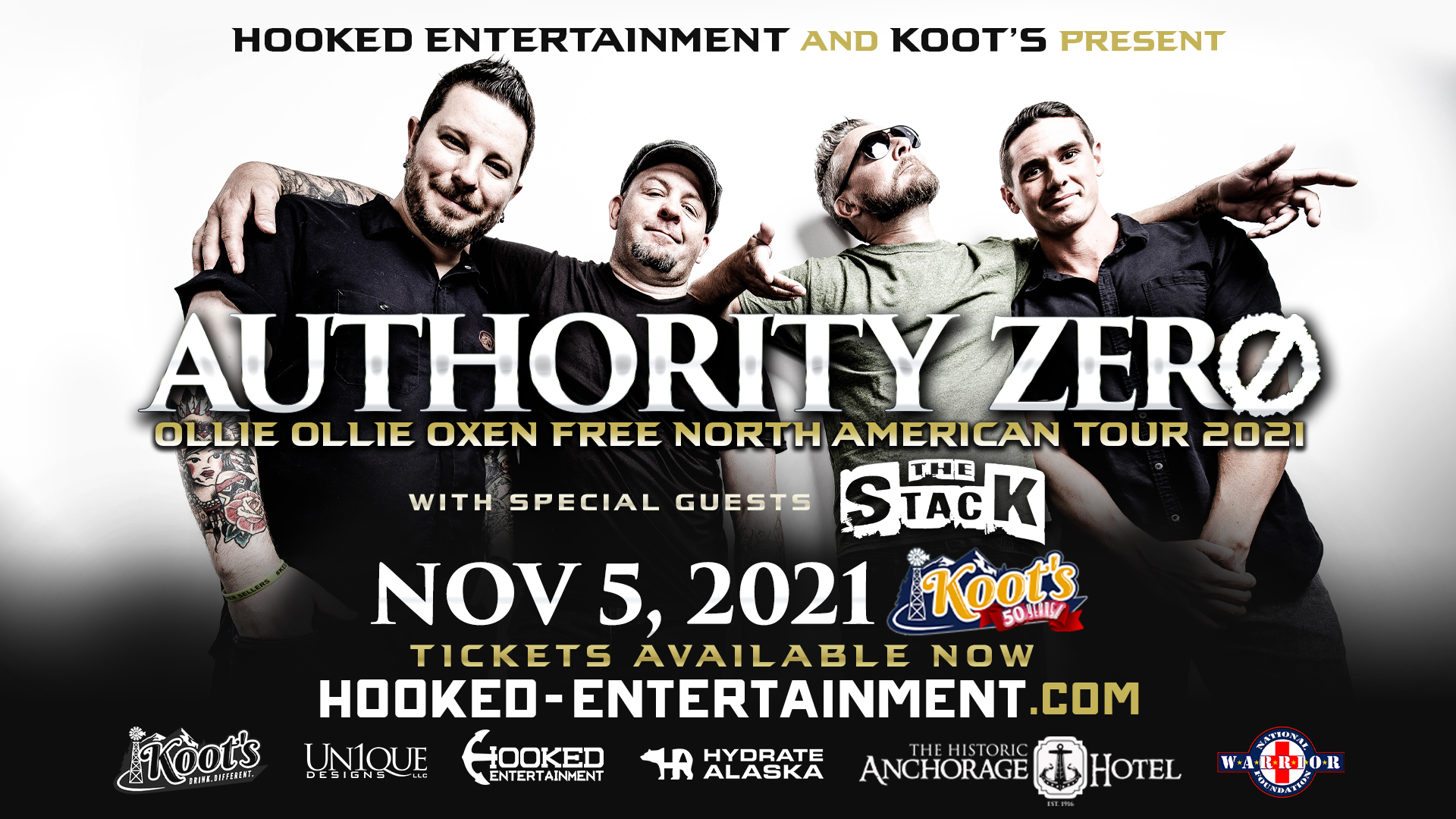 Hooked Entertainment & Koots are proud to present AUTHORITY ZERO as they Kick off thier OLLIE OLLIE OXEN FREE NORTH AMERICAN TOUR 2021 WITH SPECIAL GUEST THE STACK.
Get your tickets early online for just $28 at:

This is a 21+ show , Mask are not
Mandated but recommended.

Authority Zero is an American punk rock band from Mesa, Arizona formed in 1994. The Band's style is rooted in reggae and skate punk , with Spanish/Portuesse influences. They have released seven albums to date, two DVD's and nine single. The Band regularly tours North America, Europe and Japan.

About The Stack:
Formed in Anchorage Alaska in 2017 The Stack prides itself on bringing the highest level of energy and crowd engagement to any event. The diverse yet complimentary musical styles of its members brings this to life on any stage. A true variety band The Stack covers every genre from today’s Top 40’s Pop, Alternative Rock, Pop Punk, and Modern Country to timeless classics.

Authority Zero has never been called "negative" Even during the pandemic, they kept their colletive chin up, put their heads down and wrote what could be called their career album. Released in June, Authority Zero's album "Ollie Ollie Oxen Free" takes a line fro hide and seek to encourage fans to leave the COVID-19 deppression behind and celebrate life.During the pandemic, singer Jason DeVore saw families torn apart by political views and COVID-19. Now that the divide has soewhat susided, it's time to come out and be yourself again.
" The phrasing in the title track stems from the idea of 'Come out , come out, wherever you are," says Devore, who co-writes with bassist Michael Spero.
It encourages a focus on the positive side of 2020, while still maitaining awareness of the hardships and detriment of it all. People have been trapped within themselves, depressed inside of their houses and otherwise. We've been separated both politically and mentally between the left and the right, which is very apparent. It's a focus of come out, feel free and feel a sense of confidence to live with an unheavy heart and mind again."
The titles track rattles those cages with Devore's encouraging lyrics, the frenetic blur of Christopher Dalley's urgent drumming and Spero's bass, coupled with muscular guitar licks true to the playing style of new guitarist Eric Wlash. Authority Zero brought along a few friends for the ride- Iagri Shuhei fromJapan's HEY_SMITH on "Ear to Ear' while Pennywise's Jim Linderg quest on " Don't Tear Me Down".
For "Ollie Ollie Oxen Free," Authority Zero broke from tradition and returned to producer Cameron Webb ( SUM 41,Pennywise, A Dy to Remember, Motorhead, Megadeth). Webb last worked with Authoirty Zero on 2013's "The Tipping Point". Workig with a guy like Cameron is great because he's jus as invested in the writing process and the music in general as you are, the artist," Spero says. "He was writing in there with us.. It felt like having a fifth member for awhile."
That " fifth member" enhanced the music and lyrics of Spero and DeVore, who hunkerd down for three months during the pandemic's grip to hash out the songs for "Ollie Ollie Oxen Free". The two were committed to lyrics, melodies and music - until Webb came along. That's not a bad thing, Speo says.
"We ended up with a different lyrical content than we had originally decided, " Spero says. "Jason sends a type that he's always looking at the positvie side of thingsand challenges his listeners to grow in that way. Cameron was able to go in there and push it further."
Webb brought out the best of Dalley , too , by letting him unleash his inner Keith Moon, who, ironically, is one of his heroes. The song "Ollie Ollie Oxen Free" was written around one of Dalley's drum ideas. Spero was so inspired that he penned the music overnight.
"I had been told by other producers to simply - keep it simple, stupid," says Dalley,whose son is named after Moon. "He told me to play the weirdest stuff I could think of. He told me to go off where neccessary. That was something I never experienced as a drummer before." Formally of Pour Habit, Walsh is the latest addition to Authority Zero, having come into the band's fold in Febrary 2021. He's never been far , however. Authority Zero took Walsh's First band on it's first national tour. At age 18 , he hung out in his van while Authority Zero hit the stage inside of legendary venues like Club RIO in Tempe, Arizona. Devore, Spero and Dalley knew Walsh was the one right then and there during auditions. With its updated sound " Ollie Ollie Oxen Free" fits in with Autority Zero's catalog, DeVore says. " It's more of the times of 2020 he says. We really tried to focus more on the postive side of things that came from the pandemic, rather than the negative that came out of it. "We inflect lyrics and music in a uplifting manner. We wanted to shine a light at the end of the tunnel."