The Dirtball formerly of the Kottonmouth Kings 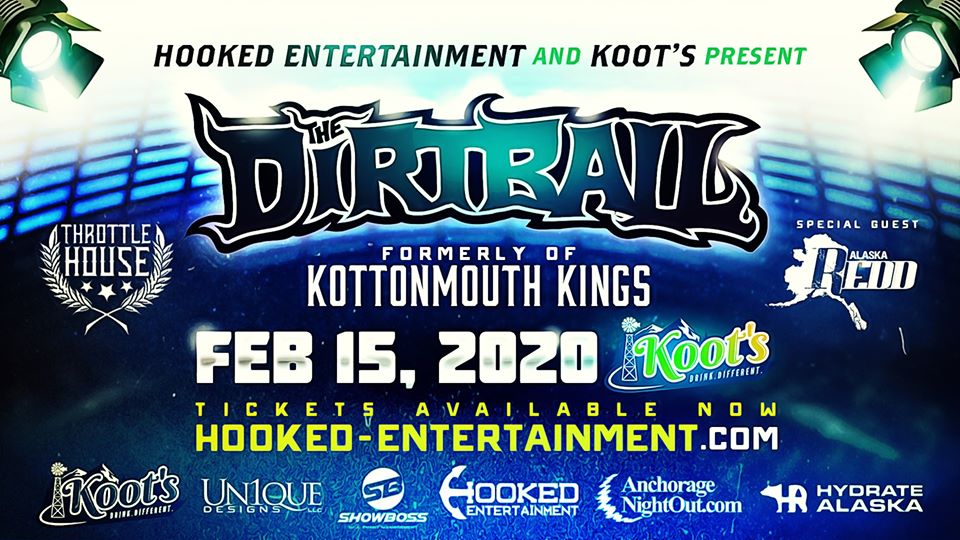 Hooked Entertainment and KOOTS are proud to present the Dirtball formally of the Kottonmouth Kings return to Alaska, February 15th at Koots. Doors open at 9 pm Music starts at 10 pm. Tickets are limited and will sell out.
Get yours today at:
www.hooked-entertainment.com

The Dirtball Bio
After wreaking havoc on the road rocking sold out crowds across the country, Oregon based rapper The Dirtball is bringing it home with the release of his fifth solo album, SKULL HOLLOW. While in the past his accelerated rhyming skills have kicked his career into overdrive, now with his latest release it’s his songwriting skills that have him cruising in the fast lane.
Inspired by his experiences in the music business and his love of creating music, SKULL HOLLOW's banging range of hip-hop is eclectic enough to leave fans of all genres salivating for more. Powered by the machinegun attack of his motor-mouth and irresistible hooks, the album can dazzle fans of Southern Rap (Ying Yang Twins, Lil Jon), battle mainstream heavyweights (Twista, Lupe Fiasco, MGK, Eminem), or stands toe-to-toe with underground legends (Tech 9ne, Kottonmouth Kings, or Insane Clown Posse).
Since the age of 15, The Dirtball (aka David Alexander) has dedicated himself to his music. Growing up in Oregon, Alexander quickly became preoccupied with drums and would be the rhythmic backbone for a number of different bands in the North West. In 1995, Dirtball decided to take his musical aspirations to the next level and formed funk-rock hybrid Chola and would tour the region cultivating a grassroots following. After six years of constant touring and recording with Chola, the band was on the brink of a national breakthrough, but personal and creative differences lead to the band’s demise.
“Chola opened the door and kind of schooled me in the art of rhyme, which helped me develop my style. Then, when the band finally disbanded, I knew right away I didn’t want to hide behind the drum kit anymore, so I just started focusing on developing my skills as a rapper,” Dirtball says of the switch from banging drum kits to spitting on the mic. “I grew up listening to rap and that’s what I loved. I never set out to be a fast rapper, it’s just this kind of unharnessed thing that I developed.”
After half a decade behind the kit, Dirtball decided it was time for a change and focused his efforts on perfecting the art of rhyme. His efforts proved fruitful when he developed a knack for creating a machinegun rapid fire flow that quickly became his trademark style. With a conscious effort to create super tight flawless lyrics, Alexander began his solo path as an MC and The Dirtball was born.
After recording a demo, The Dirtball’s rapid-fire rhymes caught the attention of a California based record label who signed him for the release of his debut, Pop-A-D-Ball. The album quickly jumpstarted his career and propelled him into several years of non-stop touring. His sophomore effort, Raptillion, was released in 2006 and became an instant underground classic that prompted PopMatters to say Dirtball’s “Rapid-fire rhymes and an ear for catchy choruses distinguish the rapper’s style, which at times sounds something like a sharper-edged Big Boi.” His Nervous System album was released in 2010, the same year the Kottonmouth Kings brought him into the group to inject venom into the band.  For eight years he toured with the group and had a heavy hand in writing four full length Kottonmouth Kings albums, as well as several bonus tracks and Ep's for them.  Hundreds and hundreds of shows later, he has ventured back into his own, creating the record label, Throttle House, and releasing his new record SKULL HOLLOW Feb 15th 2018!
The Dirtball is at the forefront of a bubbling underground scene that is taking over the hip-hop and rock scenes. In a time of record label closures and spiraling record sales, The Dirtball has rocketed into national fame with the persistence and will to survive in the jungle that is the music business. His strong work ethic and explosive live show has earned him tours with Tech N9ne, Hed PE, Kottonmouth Kings, Insane Clown Posse, and monstrous Strange Noize Tour, which went on to become one of 2007’s highest grossing independent tours. Silently lurking the underground live networks, Dirtball snaps off raps and will make listeners think twice about the capabilities of white rappers.