Tim Montana and the Shrednecks with special guest the Stack 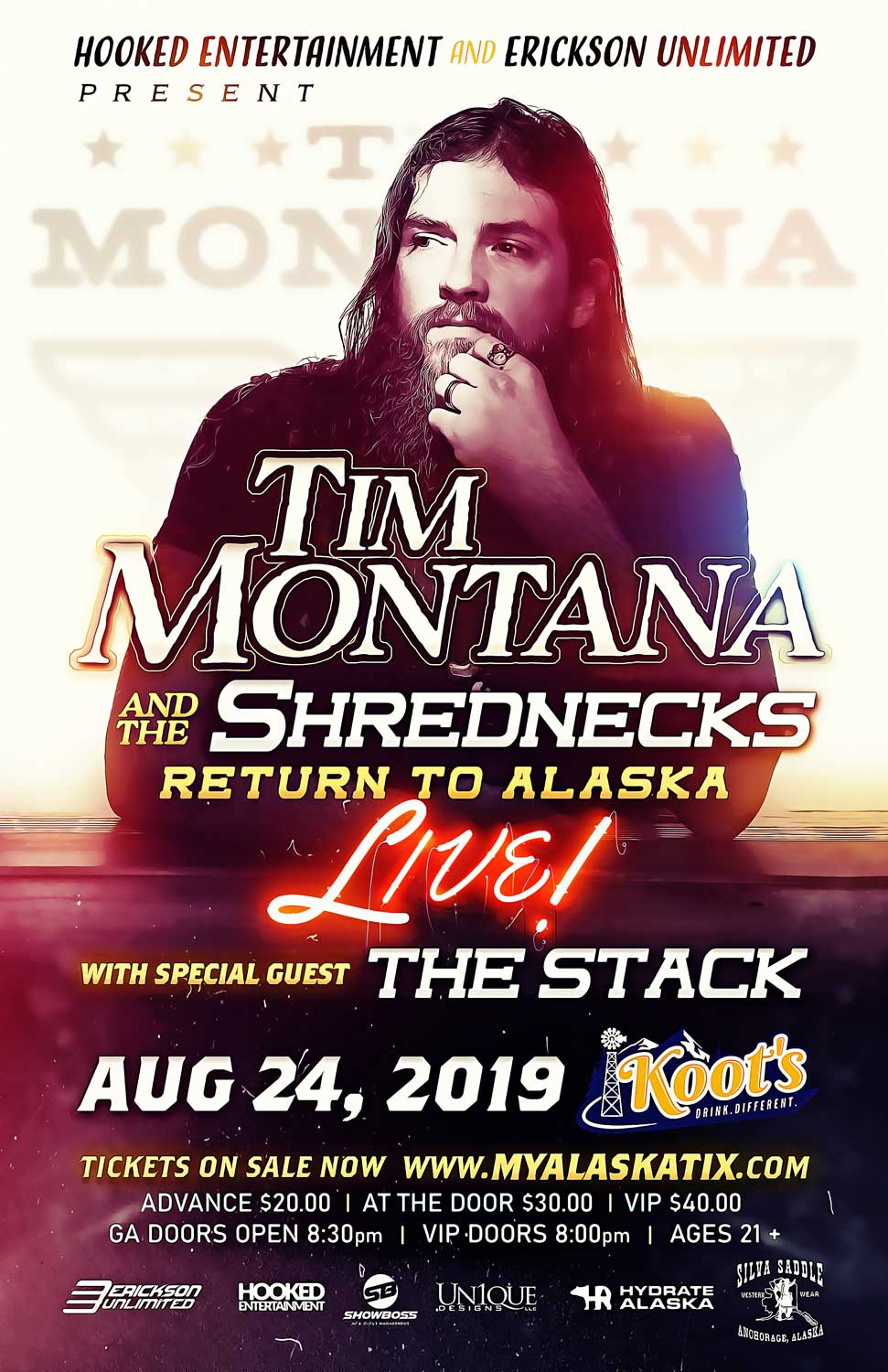 Hooked Entertainment , Erickson Unlimited and Koots are proud to Present the Return of Tim Montana & the Shrednecks, with special guest The Stack Saturday August 24th at Koots!
Tickets on Sale now at:

We would like to thank our sponsors without their support of Live Music we couldn't make  these happen.

Whether he's performing onstage with ZZ Top in front of a crowd of thousands, kicking it with his friend Dave Grohl at a Foo Fighters gig or racing ATVs with extreme-sports star Travis Pastrana, Tim Montana has a knack for always being in the right place at the right time. But don't chalk it up to luck. Rather, it's Montana's innate talent, unrelenting hustle and magnetic charisma that have made the country-rock singer-songwriter a dude that everyone — from the famous to the blue-collar — wants to be around.

Raised in the wilds near Butte, Montana, Tim Montana (yes, it's his real name), entered the world as an off-the-grid thrill-seeker. He and his buddies would take to the nearby mountains to fish, hunt and raise hell as an escape from their rustic home lives — Montana grew up without electricity. Soon, however, he sought out a different high: the kind that only comes from performing live music. Eager to perfect the guitar playing he began when he was just 6 years old, he moved to Los Angeles to put his time in studying his craft.

"Music was an escape from being secluded in the woods. When I played guitar and closed my eyes I was leaving Butte and seeing the world," Montana says. "When I moved to L.A., I went from having no electricity to living on Hollywood Boulevard. It was quite the culture shock."

In a uniquely Tim Montana way, he somehow found himself in the company of David Letterman during a trip back home to Montana, and the talk-show host personally invited him to perform on his show. In 2008, Montana sang his song "Butte, America" for a national audience on the Late Show.

Eventually, he ended up in Nashville, where he formed his band the Shrednecks and established himself as a thrilling live performer. He's a gregarious personality and struck up friendships with such diverse figures as Kid Rock and the Navy SEAL who led the raid to take down Osama bin Laden, Rob O'Neill. In Kid Rock, Montana found a kindred rebel spirit and began one of his most prolific creative periods, opening for the rap-rock icon and co-writing two charting singles for Rock's Sweet Southern Sugar album: the Top 10 country hit "Tennessee Mountain Top" and the Number 16 rock anthem "Greatest Show on Earth."

"We have a lot in common," he says of his relationship with Rock. "The way we write songs is very similar, our performance style is full throttle and we instantly hit it off."

But it's ZZ Top's legendary Billy F. Gibbons with whom Montana has formed his longest and most prosperous relationship. Natural collaborators, the pair has written, recorded and performed together countless times, co-writing songs like "Weed and Whiskey," "Rust and Red" and "Fifty Fifty." In 2013, the hirsute rockers penned "This Beard Came Here to Party," which became the theme song of the Boston Red Sox as they fought to a World Series championship, and later Music City's NHL franchise the Nashville Predators.

"Billy and I bonded over beards, and now he is part of the family," Montana says.

Now, as the Whisker Brothers, Montana and Gibbons are gearing up to launch their own hot sauce company, Whisker Bomb Pepper Sauce, with the backyard anthem "Good Ol' BBQ." Barbecue is a cornerstone of Montana's life, and he regularly gives followers the meat sweats with epic grill photos posted to his Instagram. As the brand ambassador for Traeger Grills, he recently performed with Dave Grohl at the company's all-star weekend in Memphis and taught a how-to-barbecue class to music-industry executives in Nashville. In addition to Traeger, Montana is a spokesperson and influencer for Black Rifle Coffee, Snap-On Tools, Polaris and Weather Guard, and remains a passionate advocate for the U.S. military, helping tell the stories of patriots like Rob O'Neill and the late "American Sniper" Chris Kyle.

"Working with brands is something I never set out to do, but it happened because I genuinely love products that fit my outdoor lifestyle. I couldn't sell teeth-whitening stuff, but I can sell a grill," he quips. "And my heroes have always been soldiers. I love getting to help those guys and acknowledge their sacrifice. I'll always support the military."

But while Montana may be a foodie, a marksman, an adrenaline junkie and a TV personality, it's music that remains at the core of the man. In the fall, he'll release his new full-length album American Thread. The video for the LP's supercharged title track, featuring Montana in his snowy home state, is currently in rotation at CMT and shortly he'll unveil a video for another album cut, "Mostly Stoned." Unable to do anything small, Montana enlisted notorious Hollywood bad boy Charlie Sheen to direct the clip, garnering national headlines for the project.

And he has yet more irons in the fire. His song "Asphalt Throwdown" is being used by Fox Sports for its NASCAR telecasts, the raucous "Hillbilly Rich" appears in the Action Figures 2 film, and the original composition with Gibbons "American Dresser" soundtracks the Tom Berenger movie of the same name. All of this builds on what Montana has already accomplished since breaking out of Butte all those years ago.

But he's nowhere near finished.

"It wasn't easy for me on Music Row, so I had to work a little bit harder," he says. "Now we're doing things in Nashville in a way that hasn't been done before."

For Montana, the Big Sky is the limit.


Thank you! Your submission has been received!
Oops! Something went wrong while submitting the form.