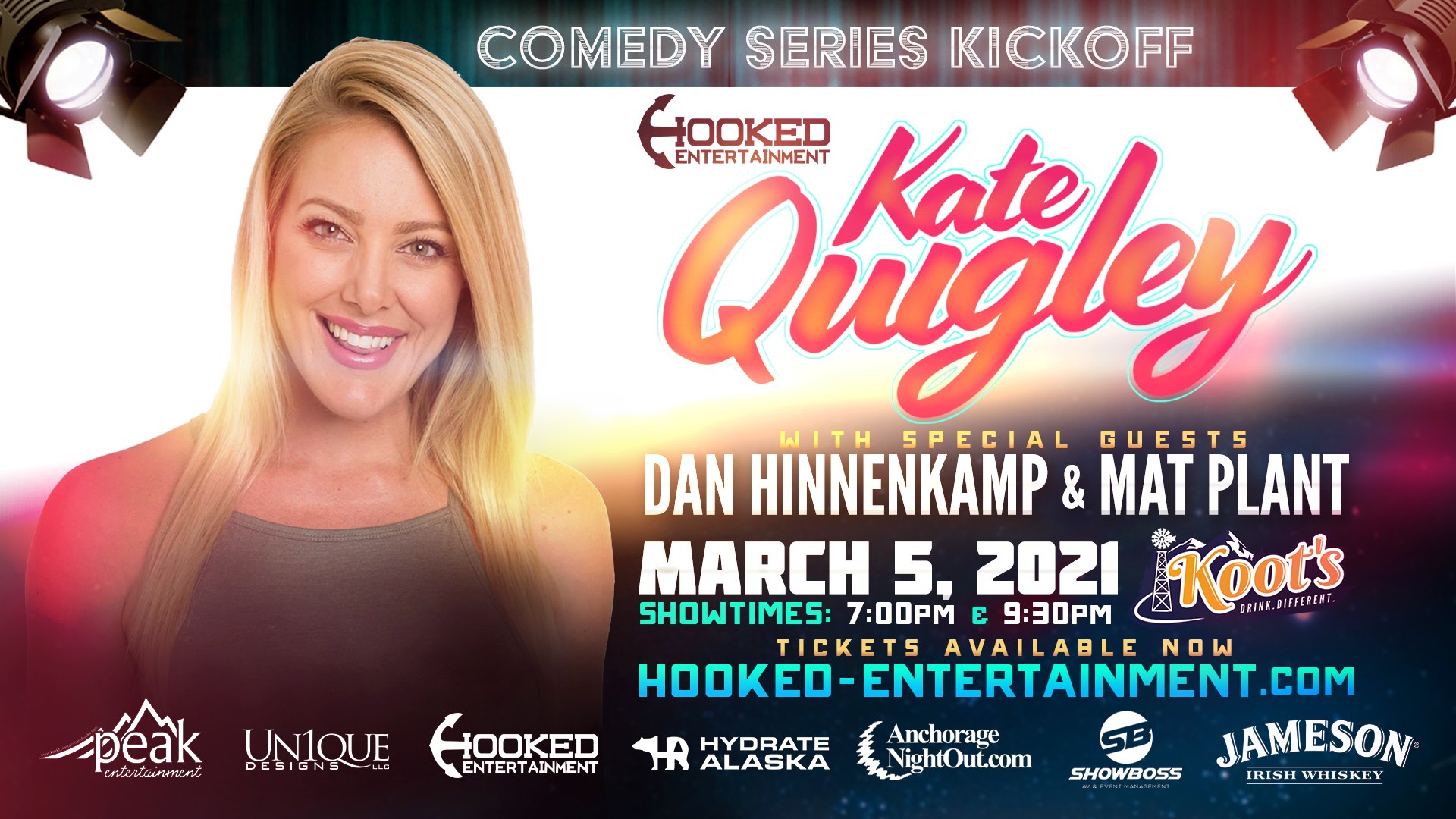 Hooked Entertainment, Koots & Jameson are happy to present Comedy at Koots starring Kate Quigley with special guest Dan Hinnenkamp & Mat Plant! Your host for the evening will be our own very funny guy Mike Lajoie!
Tickets are Just $20.00 in advance at hooked-entertainment.com/shows.
or $25.00 at the door! Tickets are very limited as we want to keep everyone safe. This is a 21+ show with two shows on March 5th. One at 7 PM doors open at 6:30 PM and the Second one at 9:30 PM doors open at 9 PM.

Kate Quigley is a standup comedian, host, & actress. She recently hosted the AVN Awards (airing on Showtime,) and can be seen on MTV2’s ADD TV (All Def Digital). Widely known as the “up for anything” star of UNDERCOVER on Playboy TV, Kate’s other TV credits include THE OFFICE (NBC), THE JOSH WOLF SHOW (CMT), THE DANNY COMDEN PROJECT (Pilot for Warner Bros), THE MEGAN MULLALLY SHOW (NBC), and TALKSHOW WITH SPIKE FERESTEN (FOX). She also hosts a podcast, #DateFails (with approx 50k downloads per week.) Kate's wild antics such as shocking folks by bikini crashing formal events, & her hit mobile pop-up show, THE HOLLYWOOD POOL PARTY have helped her gain an extremely active social media following of over a quarter million people. Kate has been featured as Sports Illustrated, "Lovely Lady of the Day" twice & TheChive's "Girl You Should Know." She tours as a headlining comedian and performs regularly at the Hollywood Improv, Laugh Factory, Icehouse, and the Comedy Store.. She recently returned from an Armed Forces Tour, performing for troops in Japan, Singapore, Guam, and Diego Garcia.

Dan Hinnenkamp is an up & coming standup comedian from Minnesota making his first appearance in Alaska. Dan is a Two-time finalist as the funniest comic in Minnesota. He is a regular at the House of Comedy in the Mall of America.

Mat Plant is a great Comedian that is making a name for himself here in Alaska. He always has the crowd laughing hard !