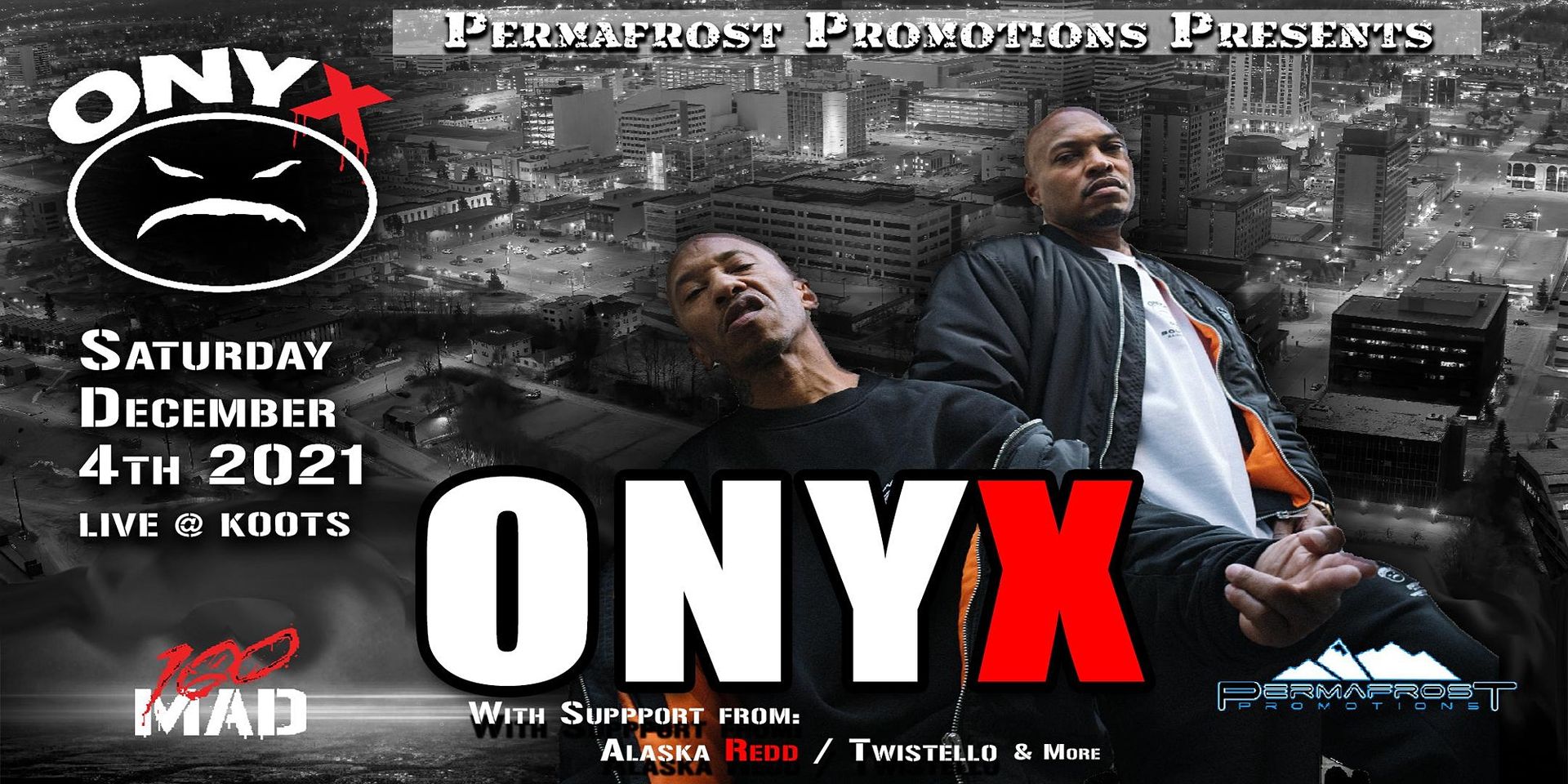 PERMAFROST PROMOTIONS PRESENTS:
ONYX
SATURDAY DECEMBER 4TH
@ KOOTS 2435 SPENARD
DOORS @ 10PM
Very Limited VIP Meet & Greet Available
Meet & Greet 7-8PM Day Of Event @ The Tree House on Boniface
This is a 21+ event
The late 90's early 2000's was the golden era of Hip Hop. In that time frame there were a few groups / emcees that made as much noise as ONYX!
Onyx is an American hardcore hip hop group from South Jamaica, Queens, New York City, formed in 1988 by Fredro Starr, Suavé (also known as Sonny Seeza) and the late Big DS. Sticky Fingaz joined the group in 1991.
They are best known for their 1993 platinum hit single "Slam", which The Source magazine described as a song that introduce the art of slam dancing into hip-hop. The group has released eight studio albums, three of which have charted in the Billboard 200 albums chart Top 25. Their debut album, Bacdafucup, has been certified platinum, won Best Rap Album at the Soul Train Music Awards and was selected as one of The Source magazine's 100 Best Rap Albums.
In 1993, Onyx released their debut album, entitled Bacdafucup. The album proved to be successful, receiving a platinum certification from the RIAA and peaked at #10 on the Billboard 200, the group's highest debut at that point. In 1998, the album was selected as one of The Source's 100 Best Albums. Three of the album's songs reached the Billboard charts; "Throw Ya Gunz", "Slam", and "Shiftee". Their breakout single, "Slam", was aired on MTV and BET, causing the song to reach #4 on the Billboard Hot 100. "Slam" was certified Platinum by the RIAA on August 10, 1993. In 1994, Big DS left the group to start a solo career, producing music under his own record label called Illyotic Music. In 1995 Onyx released its second album, All We Got Iz Us, and founded its own record label, Armee Records, distributed through MCA Records. Through its record label, the band produced music by Gang Green, All City,[ Panama P.I., and Choclatt. In April 1995 Marvel Music, a short-lived imprint of Marvel Comics, released a comic book based on the band called "Onyx: Fight!". Written by Karl Bollers and drawn by Larry Lee, the comic depicted a post-apocalyptic New York City where Onyx forms an underground rebellion. In 1998 the band released their third album Shut 'Em Down, which featured appearances from other bands, including X-1, DMX, 50 Cent, All City, Mr. Cheeks, Wu-Tang Clan, N.O.R.E., and Big Pun. Produced by Keith Horne, Self, and others, the album peaked at #10 on the Billboard 200, selling 500,000 units. Three of the album's songs reached the Billboard charts; The Worst, Shut 'Em Down, and React. Shut 'Em Down was Onyx's last album on the Def Jam Recordings label.
On March 18, 2014 Onyx released their first album in over a decade, called Wakedafucup. Released through Goon MuSick, the album is entirely produced by Snowgoons. The album features guest appearances from Sean Price, Papoose, Cormega, Reks, Snak The Ripper, and ASAP Ferg. WakeDaFucUp was named by XXL as one of the best hip-hop albums of 2014. In 2014, X-Ray Records (a division of Cleopatra Records) released a compilation of Onyx's unreleased songs called #TURNDAFUCUP. The collection mainly contained songs from the unreleased album CUZO, in addition to modern trap style remixes of several of their older songs. It featured guest appearances by Busta Rhymes, Raekwon, Myster DL, Ras Kass, and Ill Bill. In 2015, Onyx released Against All Authorities, a six track EP protesting racial injustice and police brutality in the United States. The EP was produced by Canadian producer Scopic and features appearances by Sick Flo, Ras Kass, Jasia'n, and Canadian rapper Merkules. Later that year, Def Jam released an eleven-track compilation of Onyx's classic songs called ICON. On November 22, 2015, Snowgoons attempted to raise funds on Kickstarter for a new project called Onyx vs. M.O.P., planned to be a new collaboration album that would have been released in spring of the next year. Because the project only received $10,000 out of its $30,000 goal, it was canceled on December 18, 2015.[41] In 2017, Onyx collaborated with the Dutch hardcore hip hop group Dope D.O.D. to release the collaboration album Shotgunz In Hell.[42] The album features appearances by Sick Flo, Snak The Ripper, Dopey Rotten, and DJ Nelson.

In 2018, Onyx released Black Rock, which was produced by Onyx and Slovenian producer Kid AC.[

On May 31, 2019, the album "100 Mad" was released, the title referring to Onyx's artist collective. Production on the album included Snowgoons and The Alchemist, and guest vocalists included Conway The Machine, Tha God Fahim, Jay Nice, Planet Asia, Termanology and more.

In July 2019, Onyx announced the release of a new compilation of unreleased songs called Lost Treasures. The cover for compilation was drawn by designer from Russia.The compilation was released through X-Ray Records on February 7, 2020.

On November 15, 2019, the group released the eighth studio album SnowMads, entirely produced by Snowgoons. Among the guests on the album were rappers Bumpy Knuckles aka Freddy Foxxx, Flee Lord, Nems, SickFlo, Knuckles of NBS and Ufo Fev. The album was chosen as "The best rap album of 2019" by the Russian website Rap.Ru,[55] as well as "one of the best rap albums of 2019" by the editors of the Russian website HipHop4Real. The album was featured on a Russian late-night talk show Evening Urgant hosted by Ivan Urgant on Channel One, where Onyx performed their most famous hit "Slam", as well as on the Bulgarian show Шоуто на Николаос Цитиридис on bTV, where members of the group gave an interview and performed the song "Kill Da Mic".
On April 9, 2021, the group released their ninth studio album, Onyx 4 Life. The album features rappers Mad Lion, Cappadonna, Panama P.I., Planet Asia, SickFlo and Snak The Ripper. Music for the album was produced by Chilean beatmakers Crack Brodas (DJ Audas and El Bruto CHR). Onyx released a two visuals for "Coming Outside" and "Ahh Yeah". The cover for the new album was painted by the Russian tattoo artist Alexey Mashkow.