Tiffany with members of L.A. Guns & local guest Zen Trembles and The Stack 7/24 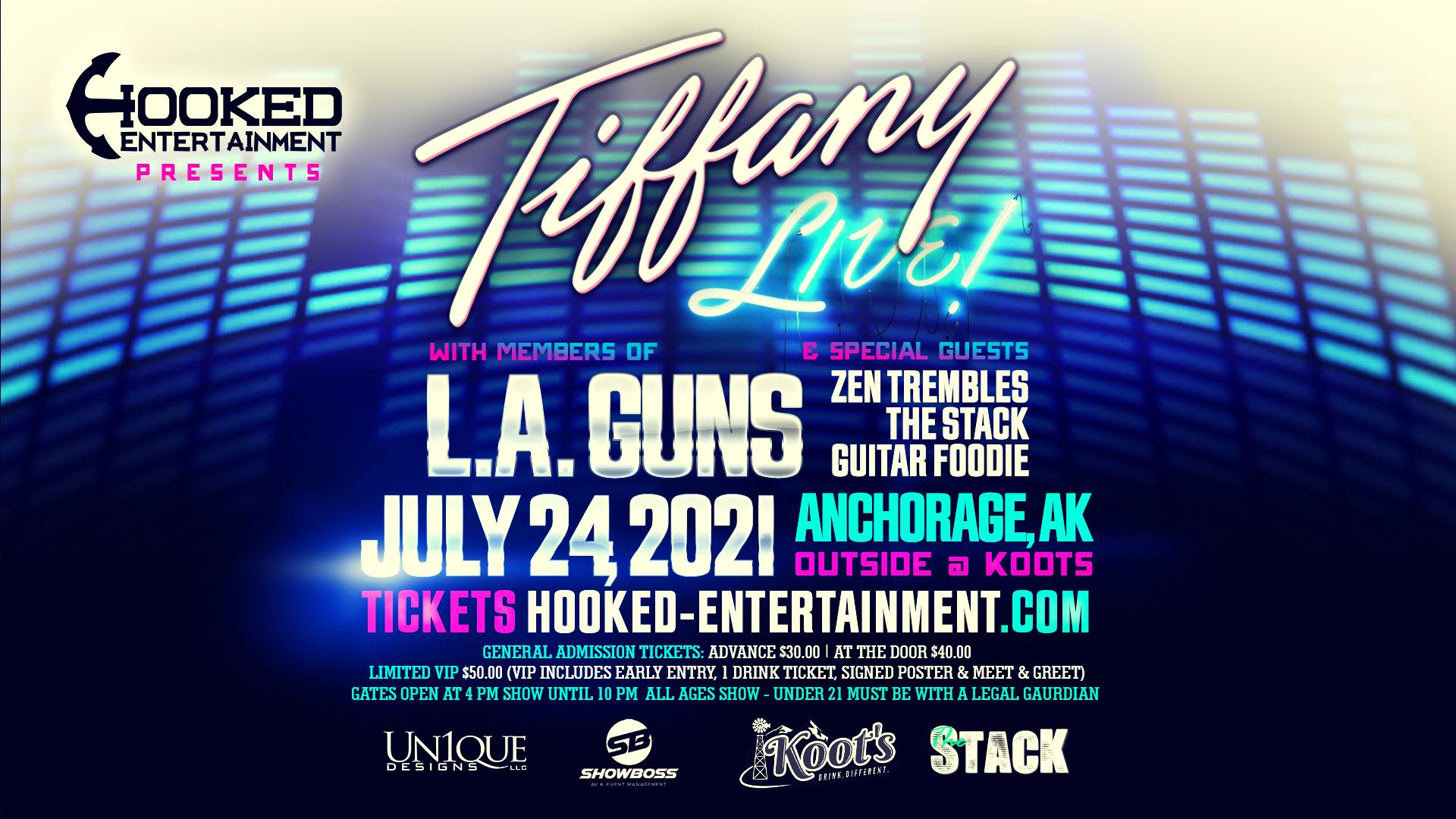 "I think we're alone now"... well you won't be at this show! Hooked Entertainment & KOOTS presents Tiffany with members of L.A. Guns Saturday July 24th outside in the KOOTS parking lot! Get ready for a night of pop/rock music from legendary pop icon Tiffany with members of L.A. Guns, along with well traveled, singer-songwriter, producer, and foodie, Tom Vrem "aka" Guitar Foodie, and our very own Alaska favorites Zen Trembles and The STACK !
This is an all ages show ,anyone under 21 must be with a legal Guardian. There will be Adult beverages for those 21 and older and some of Alaska's favorite FOOD TRUCKS on hand. Some come Thirsty and Hungry! You can get your tickets today at:

*GA tickets just $30. online $40. at the door
*Very limited VIP tickets are just $50.00 ONLINE ONLY & Includes 3:30 entry,1 drink ticket,autographed poster and a Meet and Greet.
* Children 12 and younger are free.
* Lawn Chairs are allowed (NO TENTS OR UMBRELLA's)
*Rain or Shine (No Refunds)

A legendary pop star, Tiffany earned two U.S. number one hit singles with “I Think We’re Alone Now” and “Could’ve Been,” and set a record as the youngest female artist to top the Billboard charts with her debut album. In 2000, Billboard ranked Tiffany’s album The Color of Silence as the “Top Ten Best Albums of the Year.” In 2011, she released her country-pop LP Rose Tattoo, embracing the music she grew up on. Her 2016 critically acclaimed A Million Miles marked the first time Tiffany had been a co-producer on her own record. As a writer and co-producer on her 10th studio album, Pieces of Me, Tiffany fused elements of rock and pop, while still showcasing her trademark tendency for big radio friendly choruses. She has sold more than 15 million albums to date.

Tiffany has obtained a long and storied career. She released the 2019 version of “I Think We're Alone Now” and the music video has more than two million views. In the summer of 2019, she performed 55 shows in 53 cites for more than 600,000 fans on the North American Mixtape Tour with New Kids on the Block, Debbie Gibson, Salt-N-Pepa and Naughty By Nature. In the fall of 2019, Tiffany kicked off her 40-city, North American Pieces of Me Tour with rave reviews for her new pop/rock sound and live show.

Today her goal is to continue writing songs for herself and others, cementing her status in the industry as a powerhouse hit maker and go-to songwriter. Tiffany also has combined her love of music and food to launch a cooking club, Let's Food with Tiffany. In 2020, her EP Pieces of Me: Unplugged was digitally released and she released her first, original Christmas song, “Angels.” In 2021, her new album, Shadows, will be released in partnershiAp with Deko Entertainment (ADA/Warner Music Group) and she will headline a North American tour with members of L.A. Guns.

Tiffany made her acting debut voicing the Iconic Character of "Judy Jetson" in Jetsons: The Movie, which grossed more than $20 million at the Box Office. More recently, Tiffany did cartoon voice overs on "Robot Chicken" (Cartoon Network) and starred in two Highly Rated & Campy SyFy Channel Original Movies, Mega Piranha and Mega Python vs Gatoroid, the latter of which co-starred her 80s Pop "Rival" Debbie Gibson. Her guest starring roles include "How I Met Your Mother", "That 80's Show", "The Young & The Restless" and many others.

Songs from Tiffany's most recent albums have appeared on such hit TV shows as "The Good Wife" (I Luv How U Feel), Switched at Birth" (Crazy Girls), "Intervention" (History), "Dominion" (Christening), The Nine Lives of Chloe King" (Na Na Na), "Greek" (Na Na Na), "Brothers & Sisters" (Ride It, Be With U Tonite), 'Ugly Better" (I Luv How U Feel), etc. In 2019, “I Think We’re Alone Now” went viral for "Umbrella Academy", which returned the song to the iTunes Charts around the world and it also hit No. 1 on the Billboard TV Songs Chart

About Tom Vrem "aka" Guitar Foodie:

Tom began playing the guitar at the age of 5 after shaking Kenny Rogers hand at a live concert. His first concert he attended was Johnny Cash. He was raised by two hard working parents that grew up on Dakota farms. He was born in Minnesota, raised in Illinois, and now resides in Nashville, TN. Tom has had an extraordinaire life in music. He began playing out professionally at the age of 16. Has played guitar in every state. He has toured with ZZ Top as a road manager for Tim Montana on a world tour, played live shows in 23 countries, engineered and produced albums out of some of the best studios in the world, written guitar books as well as cookbooks ( currently writing a Guitar Foodie cookbook with Tiffany of 80s fame). Tom began producing and engineering out of Blackbird Studio in 2014 after graduating from The Blackbird Academy. Tom interned at Blackbird while Chris Stapleton’s Traveler was being mixed in Studio A. Tom has written, produced, and recorded songs that have millions of plays on Spotify as well as songs that have aired on regular rotation on CMT. He has helped record countless mainstream artists at Blackbird including, Tiffany, Kid Rock, Hank Jr., Sam Williams, Amos Lee, Buddy Guy, just to name a few. Blackbird Studio 1 Tom Vrem “aka” Guitar Foodie is owned by John and Martina McBride. Being based out of Blackbird has put Tom in the epicenter of the Nashville music scene. One of the effects of that was in the fall of 2015 Sam Williams, Hank Jr’s youngest son and grandson of Hank Williams Sr. moved right next door to Tom. They immediately became close friends. Tom ushered Sam into songwriting and the two began playing live shows in 2016. Sam released his first single “Darkwater” that was written by Tom 10 years earlier. The release was Sam’s debut to the world that he was following his families musical tradition. Tom produced and recorded the first song that Sam wrote with Tom “Lost Grandchild’s Plea” which video debuted on CMT top 10 in 2017. Since then Tom has been producing and recording some of the best up and coming Americana and Country artists in Nashville. Even during the Pandemic Tom toured 9 states having Nashville style writers rounds with artists he has recorded. Tom is a consistent songwriter that has thousands of songs under his belt. Tom has currently been recording his own EP with some of the best session players in Nashville. 5 time grammy winner Roy Wooten [Roy and Tom both played in Planeless Pilots} and multi-platinum selling artist Tiffany also add their touches throughout the EP. Late in 2020 Tom met Harry Waters, son of Roger Waters of Pink Floyd fame. Immediately the two of them began working on tunes and the first one ‘Stranded” will be released June 28th of this year. Then Tom will begin his ‘Stranded Tour” that already has shows booked from Florida to Alaska. Tom’s love of music and deep knowledge of the industry in Music City keep him relevant in these ever changing days. Catch him cheffing it up Guitar Foodie style as well. He is a true Foodie and it shows! He does private dinner parties that will tantalize your taste buds too. Bar and restaurant takeovers are a angle that Tom learned fromTiffany. When live shows ended in 2020, Tiffany was left stranded and stayed at Tom’s home studio fro quarantine and brainstormed on ideas. She came up with a concept where she takes an ongoing menu item and adds a twist to add some of her Foodie love to the food. She also provides a drink menu to pair with food and some appetizer and entrees. Tom loved the idea and is also doing Guitar Foodie takeover nights using her method.

Formed in Anchorage Alaska in 2017 The Stack prides itself on bringing the highest level of energy and crowd engagement to any event. The diverse yet complimentary musical styles of its members brings this to life on any stage. A true variety band The Stack covers every genre from today’s Top 40’s Pop, Alternative Rock, Pop Punk, and Modern Country to timeless classics.